Today marks the grande finale to our Olympic Feasts series. Joining us today, is Diana Young, mia amica bella italiana – I hope that means my beautiful Italian friend! Diana and I met when our oldest daughters were in first grade. Their friendship led to ours and we’ve enjoyed five years of chatting about the things we love most – family, friends, faith, travel, food…the list could go on and on. Diana is an amazing cook and I’m delighted she’s joining us at the table today. 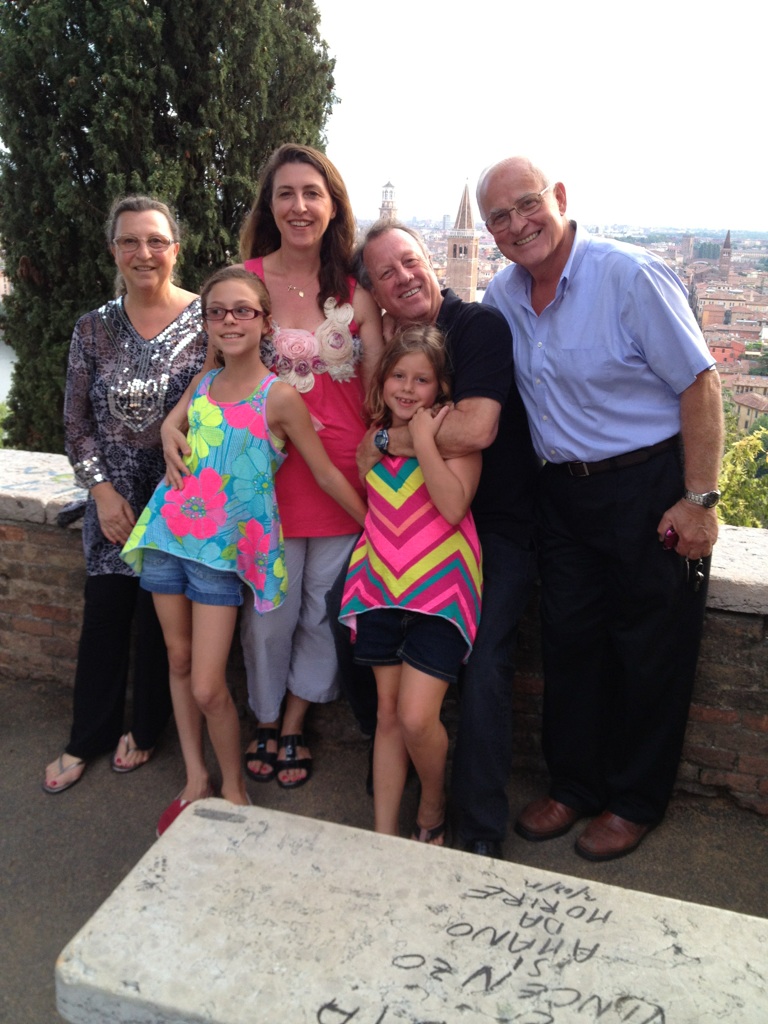 {Diana & Mike Young with their daughters and Diana’s parents. Italy 2012}

This recipe was born some time ago from an idea and an Italian family discussion. (Italians are great at doing this. They can actually discuss something for hours just for the pleasure of doing it).

Three generations together having lunch: My grandmother Maria, my Mom, my Aunt and I outside on the kitchen porch in the summer. It was very hot and we were all kind of not having too much appetite. My mom and my aunt started talking about how in the summer nobody should cook and nobody should eat. “It is too hot and it is too much work to do in this kind of heat!” Now you have to remember that Italy it is not famous for air conditioning systems. Actually, since the air condition has been introduced (some 5 years ago) in some of the big stores, some of the offices and some private homes, most Italians have been having all kind of ailments caused by it. From tummy aches to neck pain and numerous viruses. They are really convinced that it is evil! Anyway. I digress.

So the four generations were trying to find a way to cook (of course we have to eat!) without too much effort. We were all talking about our favorite meal and for most of us the eggplant parmesan was the best thing ever. But how to avoid the salting of the sliced eggplant and the splash in the egg wash for each one of them, follow by bread crumbs and or flour dust, with a splash in the boiling oil? Nobody ever wants to do all that in a kitchen that gets boiling hot from the frying oil and the hot oven to finish it up. And what about calories? You can stop counting at the egg wash…….

So we decided to find a way to make it with a twist. Less calories, less cooking and prepping and less work for everybody. We decided to try a grilled version of eggplant parmesan: Just grill the sliced eggplant instead of breading it and frying it.

We all got to work: Maria was slicing and grilling the eggplant, my aunt was making the tomato sauce, I was dicing mozzarella and my mom was grating Parmesan cheese.

If you grill the eggplant you don’t need to salt them to get the bitter juice out because the juice goes away during the grilling. In about half an hour we were done and that night we had Grilled Eggplant Parmesan with a nice salad and a great glass of very cold white wine…….Ahhhh, what a great meal. And the best part was that, because we worked all together, we had fun, it did not take long at all and we barely notice how hot it was. It was a magical day for all of us.

Chop and sautee the onion and the garlic with some olive oil. When they are nice and soft add the 2 cans of tomatoes with a half a cup of water and cook for about 30 to 40 minutes . In the meantime slice and grill the eggplant on the stove or on the grill and put them aside.

When the tomatoes sauce is ready lay one layer of the grilled eggplant on the bottom of a lasagna pan, put the tomato sauce on top and some of  the mozzarella and parmesan. Repeat until you have 3 to 4 layers depending on the size of the pan and the eggplant. When done cover the top layer with Mozzarella and Parmesan, cover with aluminum foil and either put it in the refrigerator until you are ready to cook it or cook it at 350 for about 35 minute. When done, uncover it and broil it for another 5 to 10 minutes, serve immediately or the next day.

« A French-Irish Hungarian Meatloaf: A Gold Medal Contender to Lift the Post-Olympics Blues
5 Easy Back To School Crock Pot Recipes »