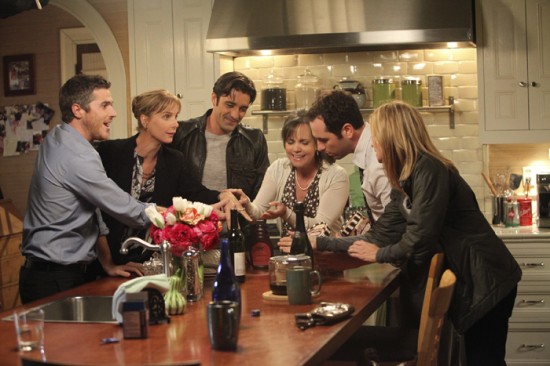 ABC airs a mega-hit on Sunday evenings called Brothers & Sisters. No doubt many of you have seen the Walker Family’s epic drama. I admit I was a tad obsessed with the show for the first few seasons. Half the fun of watching the Walker’s sort out their disfunction is texting my lil’ sister and providing our own live, personal commentary. Oh how the show’s script writers would benefit from our editorial comments. Or not.

My sister and I are full of random trivia pertaining to the famed fictitious family. Did you know the Walker’s always break out the wine (they own a vineyard) in the first scene after the commercial break at 9:28 pm? Like clockwork the family sorts through their muddled affairs over coffee until the second half of the show. Then voila! They start drinking and either the situation falls further apart or is miraculously resolved.  Or is tabled until after a two-week hiatus.

After a few seasons of coveting Nora Walker’s kitchen (ok, I still crave the fabulous kitchen) my obsession with the chic California family waned. Mostly because the Sunday evening time slot just wasn’t working for me, and I have no idea how to program the DVR feature on our TV. So I sort of moved on. My sister (who is fully functional in DVR skills) occasionally gives me updates on the Walker sisters Kitty and Sarah. And we still compare our favorite real-life mother Mia to the heroine of the Walker clan Nora.

So at this point, if you are still reading, you may think me confused for naming this post The Baxter Family.

Over the Christmas break, a dear friend from Bible study suggested I read Redemption by Christian writer Karen Kingsbury. She even lent me the first book. Now her recommendation wasn’t totally unsolicited as we were wishful thinking about all the wonderful books we would read over the holidays. And I’m grateful (I think) that she led me to this new-to-me series. Although had it not been for the wicked ear infection I suffered, I might never have slowed down long enough to actually read. But with two days of aches and general malaise, I cozied up and walked through the welcoming front door of the Baxter Family home…

I read Redemption, the first book in the series, in one day. And within a 10 day period, and with utmost pleasure on my new iPad, I literally devoured the remaining four books in the series. Led by parents John and Elizabeth Baxter the series chronicles the lives of their five adult children and the tramas, dramas, joys and sorrows each of them finds along the way.

The Baxters are not nearly as sexy as the Walkers, and therefore their story will doubtfully find its way to prime-time television. But the books are none the less dramatic. Fast-paced and easy reading, each story reveals seemingly impossible situations in the character’s lives and how through faith and trust in Christ they choose to respond.

Apparently I’m the last person on Earth to know about the Redemption series. Just in case I’m the second to last, I thought I’d pass along the recommendation.

Oh, but I’ll give you a heads up my friend neglected to tell me…

The series continues. And continues. Ms. Kingsbury is prolific and the Baxter Family drama appears to be unending. I learned there are still nine books left for me to enjoy. You know, for all those rainy days ahead.

Anyone care to join me?