I’m thrilled to have Heather share her turquoise table story. Heather is a mama to four boys, a wife, and she has time to encourage women through her ministry as a writer, blogger, and host of an incredible podcast series called God Centered Mom. Heather’s story reminds us that when we make ourselves available God shows up and does the hard work. In her urban neighborhood near downtown Dallas, a real and meaningful relationship — one she never imagined could happen — has developed at the turquoise table with a neighbor who lives right across the street.

Thank you Heather for sharing your story and for being Front Yard People! 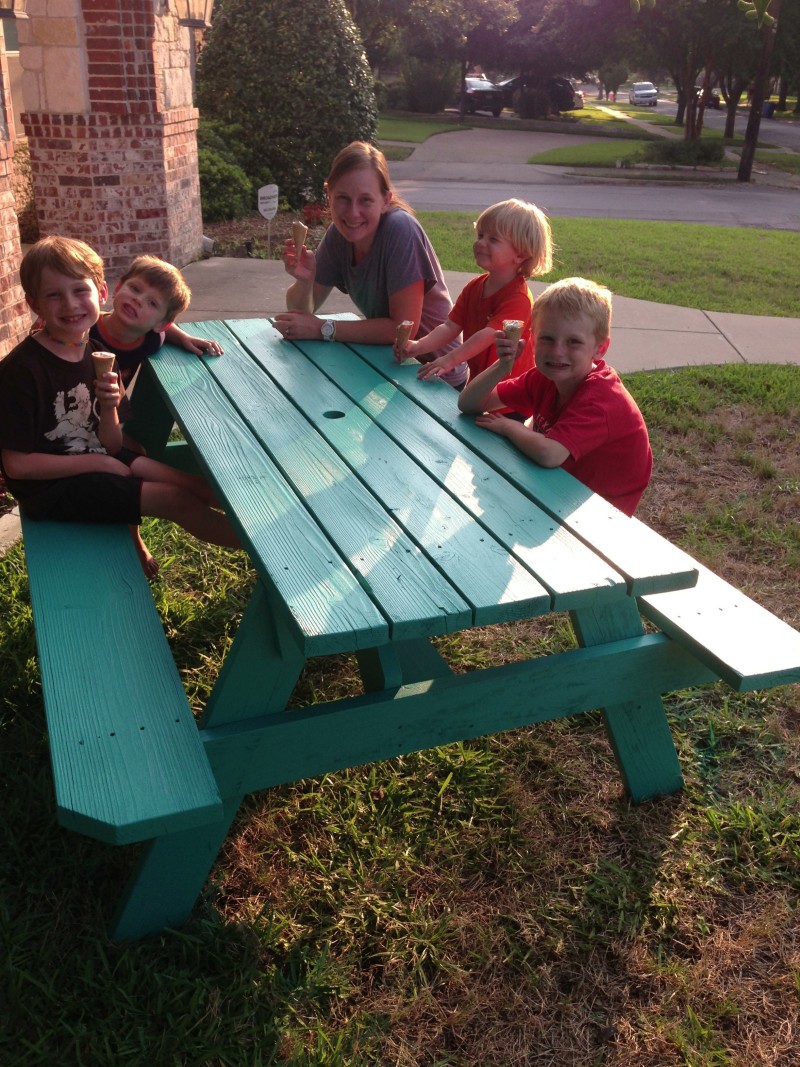 We live less than 5 minutes from downtown Dallas. A block from the highway with a view of skyscrapers from our front yard. Even though we live on a street of homes, you could say our life is pretty urban. There’s lots of variety in homes and in family structures.

To our left is a home holding four generations, including a teen single mom. Across the street is a duplex, each unit housing a single guy. To our right across the street a young family, both parents are doctors.

Since we have no front porch and live at a busy intersection, I haven’t spent loads of time out front with my boys. Honestly, my moments out front were limited to “flower planting” days. You know, once in the spring and once in the fall. Pathetic. But all that changed on one fateful day when I checked my Instagram feed.

My friend, Logan Wolfram, posted how our mutual friend, Kristin, had sent her a picnic table, soon to be painted turquoise. Now I’d seen pics of Kristin’s table, but I had never heard the stories. I definitely had never considered it could be replicated.

Unbelievably, the same day I saw Logan’s picture, driving home I saw 5 picnic tables sitting in my neighbor’s front yard. And on a chalkboard sign he’d written, “Picnic tables for sale, $75 each” and a phone number.

Seriously, God? Right across the street?

Maybe I’m supposed to buy one. It couldn’t be any easier than this.

I jotted down the number and waited a few days before mentioning my wild plan to the hubby. The next miracle? I got the hubby thumbs up. God wasn’t done. I called the number and left a message.

A couple of hours later, my neighbor, Jeff, called back. He was excited about my interest. Responding to his excitement I started blurting out my plans to put the table in the front yard and paint it turquoise. And how I wanted it to be a gathering place for the neighborhood.

He loved the idea, laughing about how he’d get to enjoy the view from his porch.

His next words stung a little, “So did you just move in to that house?”

And the need for The Turquoise Table became even clearer.

Jeff and I arranged a time to meet in his front yard and he graciously offered to cart the table. . .across the street (pretty awesome). While he secured the straps around the table then maneuvered the cart over the curb, he started sharing his stories. I learned about his son and “the son’s mother”. I heard about how he had turned his life around and was no longer bar tending. Fixing bikes and walking dogs occupied his time these days.

Apparently, the tables he was selling were ones he’d built for a beer garden but since he’d never been reimbursed he decided to sell them himself. Their loss, my gain! 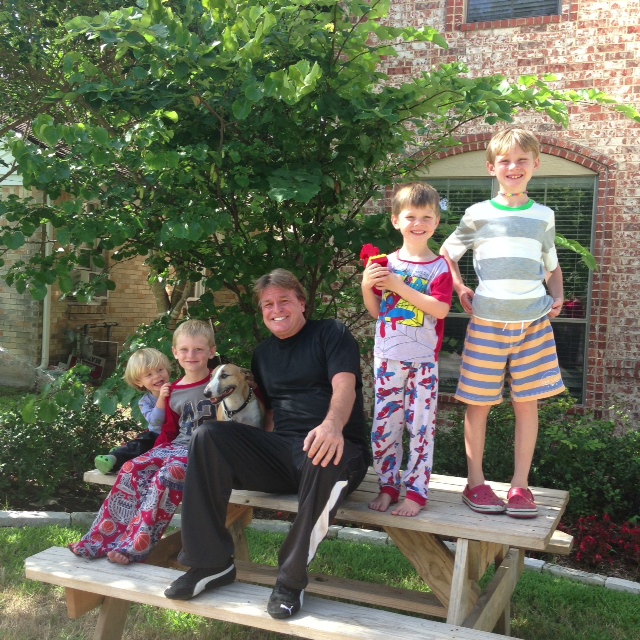 After taking this pic of the boys, Jeff & Bella, he offered to loan me his paint gun to make the job easier. Hallelujah!

A few weeks later with unseasonably cool late July weather, I decided to paint the table. So I texted Kristin for the paint brand and color. Sherwin Williams, Nifty Turquoise.

“Seriously?” I typed back.

Again God made it clear I was on the right track. A Sherwin-Williams paint store was less than a block away. I opened their doors to see the sign, “40% off all gallons of paint”. I texted Kristin the good news.

Just when I was about to pour paint in Jeff’s paint gun, I saw him fixing a bike in his front yard. He crossed the street and kindly offered to show me how to work the miracle machine.

I gave it a go and quickly the table transformed. Jeff joked about the bright color and then laughed out loud when he saw the paint splattered on my face and hair (apparently I mistakenly stood “down wind”. . .obvious amateur).

AND THEN a moment later a professional house painter hopped out of his van. He asked if he could try the paint gun, wondering if it was worth the investment. Did you notice what God did? He provided paint, a paint gun and a painter. Yes, yes He did. 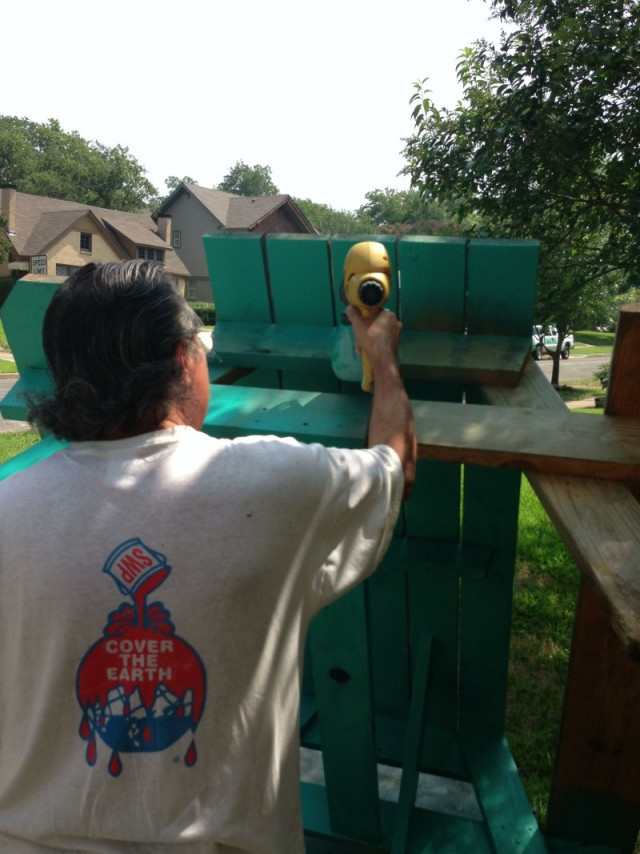 Which goes to show if God wants something done, you need to move, but he will make a way.

You may be thinking, “Wow, that’s quite a story, Heather. But what I’ve learned in the past 6 months of having The Turquoise Table?”

I’d say it’s more like, “Who have I gotten to know and learn about in the last 6 months?” Things like,

But my favorite table outcome? 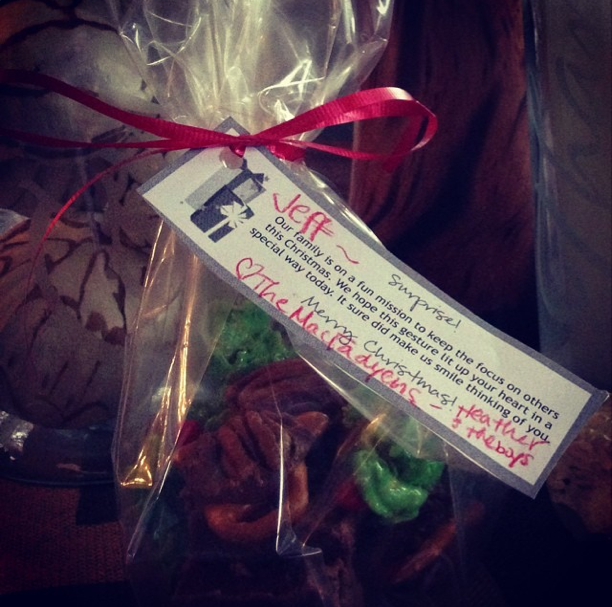