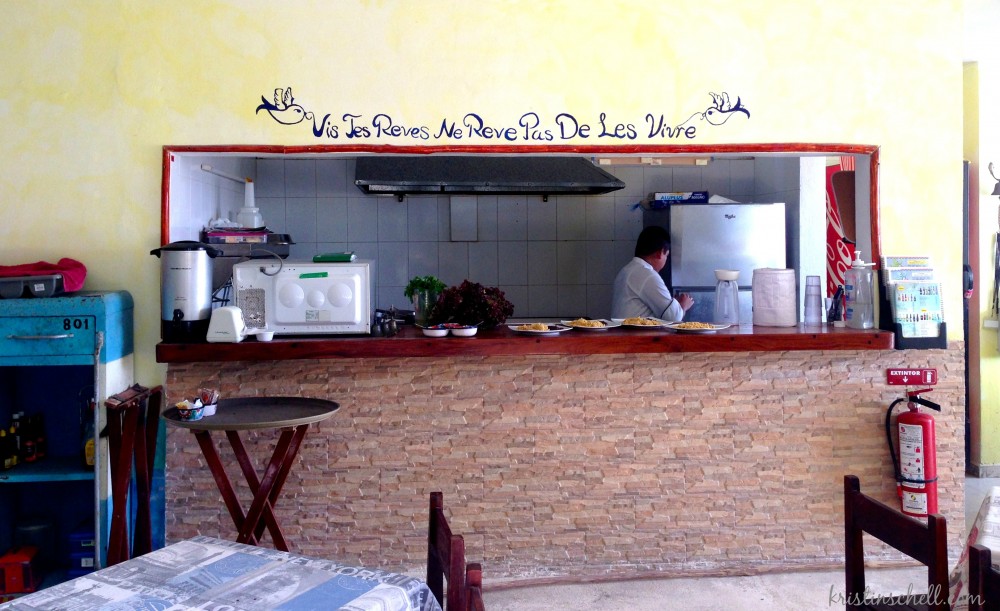 My toes are in the sand in Mexico, but I’m dreaming of France. It’s not a matter of the grass-is-always-greener or not being fully present where I am. It’s just the briny, turquoise waters have set my mind in motion.

The problem with being a dreamer is execution. Far too often my dreams remain just that. . . dreams. I notice the hand painted sign in the Mexican seaside cafe:

I ponder the phrase and the irony that I’m in Mexico and the words sprawling the length of the cafe are in French. Don’t call the grammar police, the phrase is poorly tuned, but loosely translated it means, “Don’t just dream, live your dreams.”

In 1992, I moved across the Atlantic to France. I was the cliche American in Paris, searching for answers to questions I did not know. My dreams were two-fold: write the Great American Novel and find a prince to marry. Thank God these were dreams and not prayers. I returned home a year later with no more than chicken scratch in my journal and nary a frog did I kiss.

I rented a room from a delightful French woman in the posh 7th arrondissement of Paris. Her family was pre-French Revolution nobility which meant she retained a title in name only, but the cash flow had long dried up. She and her sisters struggled to maintain their inherited properties throughout France and so rooms in the chic Parisian apartment, one block from the Seine, were rented to young women in search of their dreams.

Unlike most of the girls who came and went from the apartment, I moved in heart and soul. I nested in those walls on rue du Colonel Combes. And the quirky landlady became a friend — like a French Aunt. After a while, she allowed me into the sacred space of her tiny kitchen where she prepared our meals. Soon I was lingering around the table late into evenings with her family, long after the dinner hour was over, picking at crumbs with our fingertips until our conversations were so sleepy we finally gave in. By summer, I was invited to visit the family at their home in Provence where we climbed handmade ladders to pick olives from branches thick with years and cure them in jars of clay with herbs from the garden.

Eventually, ma tante française sold her apartment in Paris. The last time I visited her, she lived with extended family in a Parisian suburb, the name of which I do not recall. Somewhere along the way the address was lost and the letters stopped.

How did I let this happen, I wonder aloud by the turquoise sea?

I’m writing a book. I think I told you that. The process is so slow I can feel myself stuck in thick and chewy molasses. Three women, from various stages and places in my life, keep resurfacing in my thoughts as I write. One is now dead. The other seemingly lost in time. The third I’ve never met face-to-face. Writing memoir is a scary proposition—one never knows who will dance across the pages penned. In all my unencumbered imagination, I would not have thought the stories of these particular three women would ache to be told. And, in a way, to be thanked.

My dream for 2015 is to find my tante francaise. One would think The Google might make this task easy. Sadly, I’ve come up empty handed despite endless internet searches. A sense of urgency prevails, if my calculations are correct my tante francaise is nearing eighty, if not already. I mentioned to Husband, after a margarita of golden tequila, my desire to go to France this year. I’m fairly certain he heard me, I’m not faint of voice, but he gave no indication a plane ticket to Paris was in my future.

Most of the world is focused on New Year resolutions, setting intentions, and declaring their one word. I have all those ruminating in the molasses of my mind. But, today? Today by the turquoise sea in a cafe in the Yucatan, I am dreaming of a lost friendship in France.

Have you ever lost contact with someone and dreamed of finding them again?