I’m not sure what rock I’m under, but I had no idea Oprah was doing the vegan thing until this weekend. She called to personally cheer me on and wanted to make sure I passed along her website featuring her  Vegan Starter Kit. Sadly, she did not give me a new car.

Last month, Oprah and all 378 members of her Harpo staff took a one week challenge to ‘go vegan’. Many of the staffers upped the ante and stayed on the program a full 21 days. The Vegan Starter Kit website is filled with helpful information including a grocery list, three-week meal planner, and videos featuring familiar names like Michael Pollan and Kathy Freston.

If you have any inclination to know more about what it means to eat a plant-based, vegan diet you really should explore this site. Take the What’s Your Vegan IQ Quiz and see why eating vegan left one Harpo staffer feeling angry.

Meanwhile back the ranch, I’ve been having loads of fun reading recipes, organizing the pantry, and cooking for the week in preparation of my own 40 Day Plant Strong challenge. (I wish I had just one of Oprah’s staffers to help me pull this off!) I’ve heard from eight of you who will be joining me on this quest. Which is exactly eight more than I expected. Looks like we have a team! Rumor has it Mrs. Kravitz may join us too.

Speaking of Mrs. Kravitz and soup, one thing I plan to do is make a big pot of soup on the weekends so I’ll have lunches ready for the week. 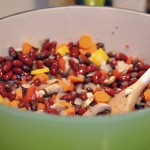 I posted the recipe for Vegan Chili recently, and it’s become a staple in our house. Husband and all of the Littles love it (covered in cheese, of course!) so I am going to make sure to have it on hand. In fact, we just finished up the last batch over the weekend.

I like the chili topped with cilantro and sliced jalapenos, and it’s also yummy rolled in a Food for Life Brown Rice Tortilla with spinach, broccoli slaw and fresh pico de gallo. I guess that would be the vegan equivalent of a burrito? 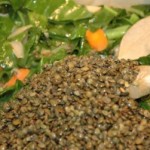 Another favorite soup I plan to have stocked in the fridge is French Lentil Soup. I posted this recipe almost two years ago and laughed when I read my recipe notes.

The first ingredient is bacon fat used to saute the onions! I told you I like bacon. Anyway, this delicious recipe can easily be adapted by sauteing the onions in olive oil, or even a tablespoon or two of water. And vegetable stock is an easy swap for the chicken stock.

So there you have it. I’m inching towards Wednesday one step at a time.

If you are joining me for the 40 Day Plant Strong challenge, please holler if you have any questions or if I can help you in any way. If not, you still want to stick around. I tested two recipes this weekend that’ll knock your socks off, vegan or not. Pinkie swear.