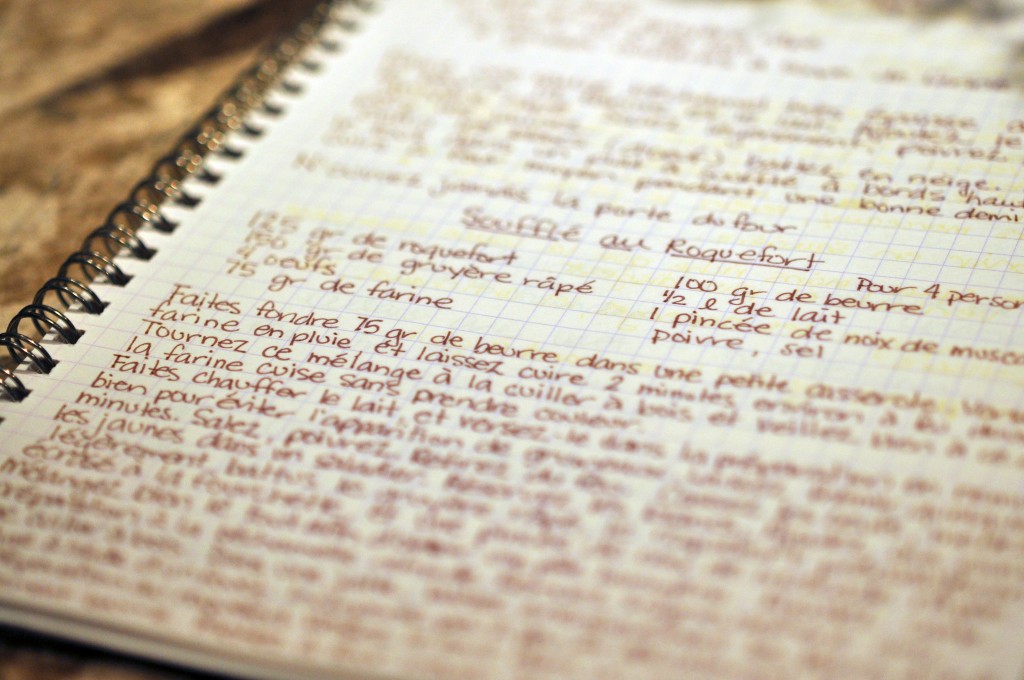 Guess what I want for Christmas?

I want to be able to read my recipe, again. I say again because I should be able to understand my own writing, n’est pas? Alas, it’s been twenty or more years since I wrote the Soufflé au Roquefort recipe in my Clairefontaine cahier. Recently, I found a treasure box filled with recipes and journal entries from ma vie en France. Sadly, I need a translator to understand my own notes. Très frustrating.

How I ended up in France in the first place can be traced to my penchant for salty, crispy french fries. Filling out high school course selections before my 9th grade year, I had to choose between French and Spanish. I reasoned I liked french fries more than enchiladas and thus based my foreign language selection. Things went well enough my first year of French, but by my sophomore year, I was in over my head and I had a big fat “F” in French to prove it. Maybe I only had a “D”, but such marks were severely frowned upon at Hockaday. So when the head of the French Department suggested to my parents that it would be “greatly beneficial” for me to participate in a study-abroad program, the advice was heeded. Et voilà, I spent the summer of 1984 in Ornans, France benefiting my GPA. I remember being terrified the entire maiden voyage across the pond. I cried buckets of tears listening to Lionel Richie on my yellow Sony Walkman and could not imagine how I would survive a summer exiled in France. Oh, the injustice of it all!

Suffice it to say, the torture of being in France lasted about a nanosecond. I do believe my one and only letter home was to request that my study-abroad visa be extended. Hooked, I spent the next decade of my life either living in France or spinning my wheels trying to get back as fast as I could. During these ten years of on-again-off-again residing in France, I acquired a deep passion for all things French, most notably la cuisine. I spent countless hours in tiny French kitchens learning the art of a well cooked meal. On two or three occasions I enrolled in local cooking classes, but most of my knowledge was imparted by skilled and plump hands trained by the hands that preceded theirs at the stove.

Long before I knew the word organic, or the concept of a CSA, I experienced these realities. At age 15, with little comprehension, but much desire, I walked with my French maman to faire les courses, shopping the tiny local farm stands. That summer, I learned first hand what two and a half decades later would be the food trend in America — buy local, eat in season, all organic, nothing out of a box. Who knew?

In these kitchens of France — in Ornans, Strasbourg, Paris and Provence, I learned more than seasonings and sauces. The seeds of hospitality were planted in my heart. I was a stranger in each of these homes, and yet in each one I was welcomed like family. I wish I could return to each one of those kitchen tables as a forty-three year old woman and thank my generous hostesses. I wonder if they ever had an inkling how their teaching and sharing would impress a doe-eyed foreigner.

And so I want to read my recipes. Notes scribbled in a language I toiled to learn. I want to return to the roots of a gift given years ago. The gift of an “F” that stood more for “future” than “failure.” At the encouragement of my dear neighbor, I enrolled in French conversation classes beginning in January at the Alliance Française. I hope you’ll join me for this journey. I would love nothing more than to share with you at my own kitchen table the humble feasts inspired and taught by simple French cooks.

First I must re-learn la langue française so I can read those recipes.