Twenty years ago today the Berlin Wall came down. The physical cage of captivity, oppression, communism, and an old regime was torn down with the eyes of the world watching. The crumbled concrete became a symbol of new world order.  Freedom.  Progress. Hope.

Nine months before the wall fell, and very unaware of the events that were to come, I travelled to East Berlin.  I was living in Strasbourg, France on a Junior year abroad gig.  Somehow during the first month of my stay in Strasbourg I landed an internship at the Council of Europe — a parliamentary body of  officials representing individual countries of the European continent.  I’m not sure what a young, inexperienced, American was doing in the middle of European human rights and democracy issues, but there I was translating one policy document at a time.  More than the hours sitting at a desk in a claustrophobic attic office, I remember the friends I made.  Friends from all over the continent – Spain, Germany, Luxembourg, Italy, the Netherlands.  Friends who spoke so many languages it made my head spin.  Friends who seemed so worldly.  Friends to whom I couldn’t say YES fast enough when they suggested I travel with them to East Berlin on a cultural exchange weekend.

So in February 1989, I spent four days in East Berlin.  Because why not? The details of how I actually travelled to East Germany are still confusing to me, even 20 years later.  My friends were participating in an invitational, goodwill program for Council of Europe members and their staff, of which I was neither.  Despite being a card carrying American, somehow I ended up in the midst of East Berlin’s propaganda junket.  I remember I did not use my American passport for the trip, and I may or may not have claimed to be French for the paperwork required at the border.  I also remember being terrified on the train when the guards woke us in the middle of the night to check our papers as we crossed the border into East Germany.  The machine gun wielding, communist officials must have had bigger fish to fry than to determine whether or not I was who I said I was.  I still get chills when I think about that night and how I essentially sneaked in to Eastern Europe.  How backwards was that? Wasn’t the objective to sneak out?

My impressions of East Berlin were what you might expect.  Behind the wall, life was colorless, still, and stale. We were paraded around to the museum that housed the famous Nefertiti bust and allowed to take in the views (of the West no less) from the Berliner Fernsehturm, a tall television tower that reminded me of Seattle’s Space Needle or Dallas’ Reunion Tower. Yet despite the chamber-of-commerce like effort to put it’s best cultural foot forward, life inside communism’s confines was dreadfully dreary and oppressive.

The highlight of East Berlin, however, was not the sites, but the people I met, specifically two boys named Mirko and Martin.  Mirko and Martin were teenagers who, having been born in East Berlin, spoke no English.  I spoke some broken German and we managed to find a French-German dictionary in a tobacco store. Naturally, there were no English-German versions as English and all ties to the western world were verboten.

My East German friends were truly fascinated to meet an American. Certainly they had heard of America, but only in limited terms.  When I asked them what they knew about the United States they replied ‘big’ and ‘free’. For several hours, and again the next day, we talked and shared stories of life in our separate worlds.  Desperate to leave something behind for them, I gave them each a quarter.  A quarter! It was all I had. On the day I left we met at the Brandenburg Gate. We exchanged addresses, and promised to write, but they told me there was slim chance of letters postmarked USA ever making it into their hands. As we said our good-byes, I noticed the boys had drilled holes in the quarters I had given them and wore them tied with leather as necklaces. 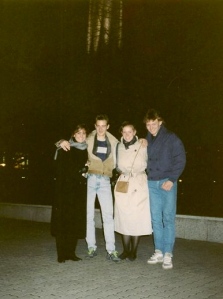 I will never forget how horrified and helpless I felt at Mirko and Martin’s situation.  My journal entry from those days expressed such great sorrow and confusion for the lot into which they had been born.  The reality that I was inside the wall for only four days was so heavy it dripped.  I could, and would, leave the concrete divide.

Twenty years ago inside the Berlin wall, my identity was as an American.  A young, idealistic, patriot who wanted equality and freedom for all.  I cried for those young boys and couldn’t justify how by birthright alone I was given the privilege of freedom.  I still feel that way.

Today at home in America, my identity is as a Christian, a follower of Jesus Christ.  I wish I had known then what I believe now, and 20 years ago within the confines of a cold, grey wall I would have left light. I would have left Mirko and Martin with more than a worthless quarter and a visual image of someone from the west.

I would have told them that on this earth they may be captive citizens, but as Paul tells us in Philippians 3:20 our citizenship is in heaven.  I would have told them true freedom doesn’t come from political liberties, but from knowing Jesus who promises in John 8:32 that if we are really his disciples we will know the truth, and the truth will set us free. I would have assured them of Romans 8:39 that nothing, even a wall of imprisonment, could separate them from the love of God that is in Christ Jesus our Lord.

My mission field is closer to home.  In fact, it’s smack dab in the middle of my family’s kitchen, and on the pages of this blog.  I know God doesn’t call the equipped, but in His great faithfulness he always equips the ones He calls.  And He has called me, like all believers, to share what I have freely received.

I don’t expect to ever see Mirko or Martin again. And, I seriously doubt they will ever stumble upon my simple, little blog.  But, perhaps someone else will.  Someone in a different kind of captivity.  Someone trapped behind a wall they cannot imagine could ever crumble into freedom.  And maybe they’ll see the way, the truth, and the life that can only come from knowing our Lord and Savior Jesus Christ.