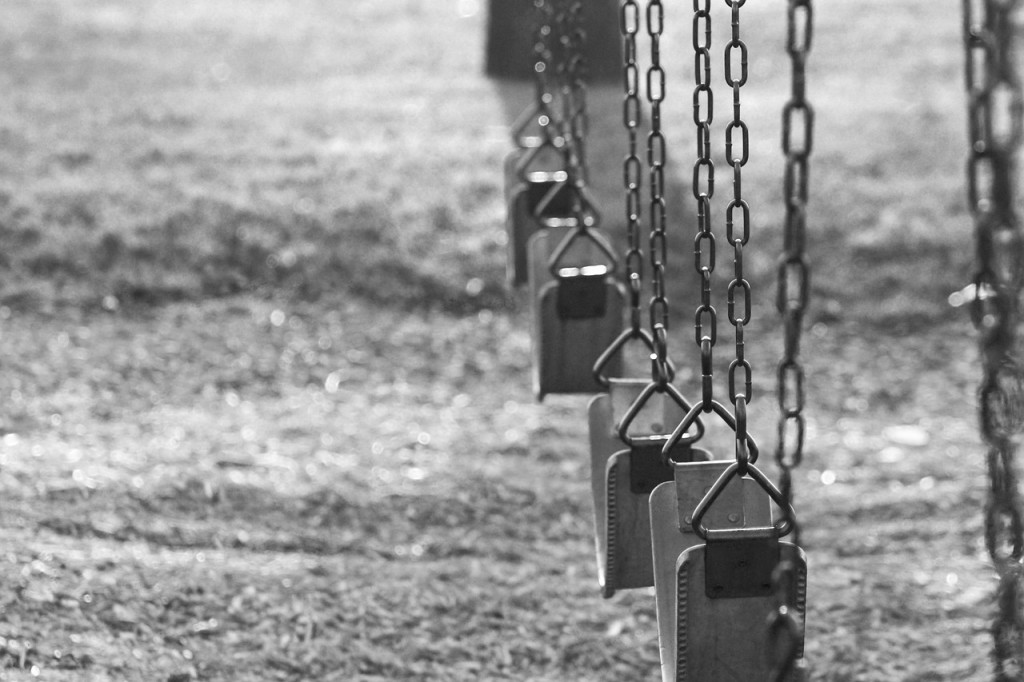 The table is all about telling stories, sharing memories, and enjoying good food together. Today, I thought I’d share a page torn straight out of my journal. Recently written, the story is as true as memory allows, although I changed the names since, well — it’s been a while.

The house on Park Lane was three doors away from the neighborhood park. From an early age I was allowed to cross carefully at the four-way stop and hang out at the playground with friends. There was a tall metal slide—the kind that now sends shivers up a mama’s spine with the unprotected vertical ladder and rusty bar at the top. That old bar probably was designed to anchor all the parts, but we used it to practice flips pretending we were gymnasts. Every so often someone would fall and land in the crushed granite-and-sand mixture twelve feet below. I never fell. Perhaps the sheer fear of falling protected me.

Millie de Fazio was my best park friend. She and Kate Bradley and occasionally Cindy Feeney would come out to play—Cindy was always reading, and when she joined us she’d have her nose in a book. But she would swing with us and answer riddles if we asked her to.

We would swing for hours—twisting those chains round and round until they were as tight as they could go. Wheeeeeeee—we’d spin out of control, until our stomachs lurched and the swing jolted to a stop. Or we’d kick high as we could to make the chains buckle. Swinging that high it didn’t feel scary, but watching Millie and the girls fly almost horizontal to those old metal poles made my palms sticky.

It wasn’t all slides and swings. The year I was in love with Tom, the neighborhood park association—a group of mothers—decided we needed upgraded park equipment. The old merry-go-round got caught up in a citywide debate on childhood safety. Too many children were falling off and getting caught underneath. One girl got decapitated. Not on our playground, but in one not too far away. It’s all we could talk about. Cindy told us what the word meant and we all pinky swore we’d never get back on the merry-go-round again. Except we did. But not without guessing how far our heads might fly if we didn’t hang on tight enough.

Soon after the rumors and fears of merry-go-rounds started, ours was removed. A small, sandy area was constructed with the ultimate safety in mind. One of the features of this new-and-improved area of the park was a giant green and yellow turtle. It was designed high enough to climb on—because riding a turtle is on every child’s bucket list—but low enough to the ground that parents would divert younger children away from the 12-foot slide and over to the safe and solemn turtle. I couldn’t care less about climbing on top of the yellow turtle with green spots. I did, however, like hiding beneath the domed shell, squished into the soft sand.  Two of us could fit perfectly underneath the protective cover of the painted clay turtle, where we’d meet to tell secrets and gossip about everything important on the playground. It was underneath the protective shell of the turtle I told Millie I loved Tom Scott.

Tom lived eight houses down from me. Same side of the street, in the red brick ranch with a porch that had three steps. The most important thing about Tom’s house—besides that he lived there—was that it was situated right next to the giant gully that ran through our street. The Dallas water and sewer department planned this massive gully like a whole city of connecting tunnels and byways. The kids in our neighborhood knew that sewer system like the back of our hands.

The easiest and fastest way to get into the trenches was to scootch down the steep concrete wall on your butt. The gully was probably eight feet deep and ten feet wide. A massive trench ran from Walnut Hill Lane to at least Woodland Drive. We never went much farther south than that, but most afternoons we would roam and hide throughout the eight city blocks within those natural boundaries.

The second way to get into the gully was a little trickier and required at least three people. You could slide through the two-foot cutout in the curb that was filled with water and leaves and sometimes rats. Or, if you had someone who was strong—like Tom—he could lift the round metal cover, a manhole with the city seal, and you could squeeze in that way. Once in the curbside drainage area, a huge round tunnel led directly into the wide open space of the gully.

We didn’t do much once we were down there. Sometimes we’d play jacks on the concrete, but our knuckles would get scratched up in a hurry. Sometimes we’d look for four-leaf clovers in the patches of weeds that broke through the concrete. Sometimes we’d just run the length of the dry waterway. But, one thing was sure about hanging out in the gully—there was always the threat that the city would release the dam and suddenly, without any warning, a fierce, forceful flood would wash us all away. The fear of a gullywasher was so real sometimes we’d decide to go to the park instead.

I don’t remember when or how I met Tom. Probably at the park or school. Some afternoons, after walking home from the third grade at Preston Hollow Elementary, I would stop at his house to see if he could go to the park or play in the gullies. Then we’d meet up with the other kids and hang out until supper. This went on for a while, and I finally confessed my crush to Millie one day underneath the turtle.

“You gotta tell him,” she encouraged me.

“Why? That would be a stupid thing to do.”

We quickly devised a plan. The next day I was to bring a box of chalk to the playground. Then, Millie and I would meet, as usual, under the green and yellow turtle.

“Right here, smack dab in the center of his shell, you’re gonna write KK + TS = Love Forever.” Millie had it all planned out.

The next day we carried out the plan. I etched the love note in my best handwriting on the underbelly of that playground turtle. We got a little carried away with the chalk. We wrote more initials and doodles and then we thought we’d be brave and write the worst words we could think of. The ones we’d only heard our fathers swear.

We each scribbled out a word and then fled the scene of the crime, leaving the inside of the turtle’s shell covered in third-grade graffiti.

I don’t know who tattled, but my mother got a phone call from another mother, and I got in trouble. My initials betrayed my identity. And, my schoolgirl crush on Tom was also now out in the open for all the mothers to discuss.

My mother sent me to the park with a spray bottle of Windex and a handful of old rags. I scrubbed and cleaned the stupid turtle until all the words and doodles disappeared. I had to write a note of apology to someone … I never knew who, exactly. The neighborhood playground association president? Probably Tom’s mother.

For the next few weeks I sulked around the park convinced I was the talk of the neighborhood scandal. On the evenings the parents would gather at picnic tables under the concrete pavilion for potluck supper and jugs of Gallo wine, I would swing, away from the crowd.

Not too long after that, Tom and his family moved away. Millie and I didn’t go down to the gully much afterwards. Our parents found out about our hangout and told us terrible tales of snakes, disease, and the potential threat of drowning. We told them, “We know, we know.”

The fear of gullywashers had always kept us safe. But, we had never considered snakes.