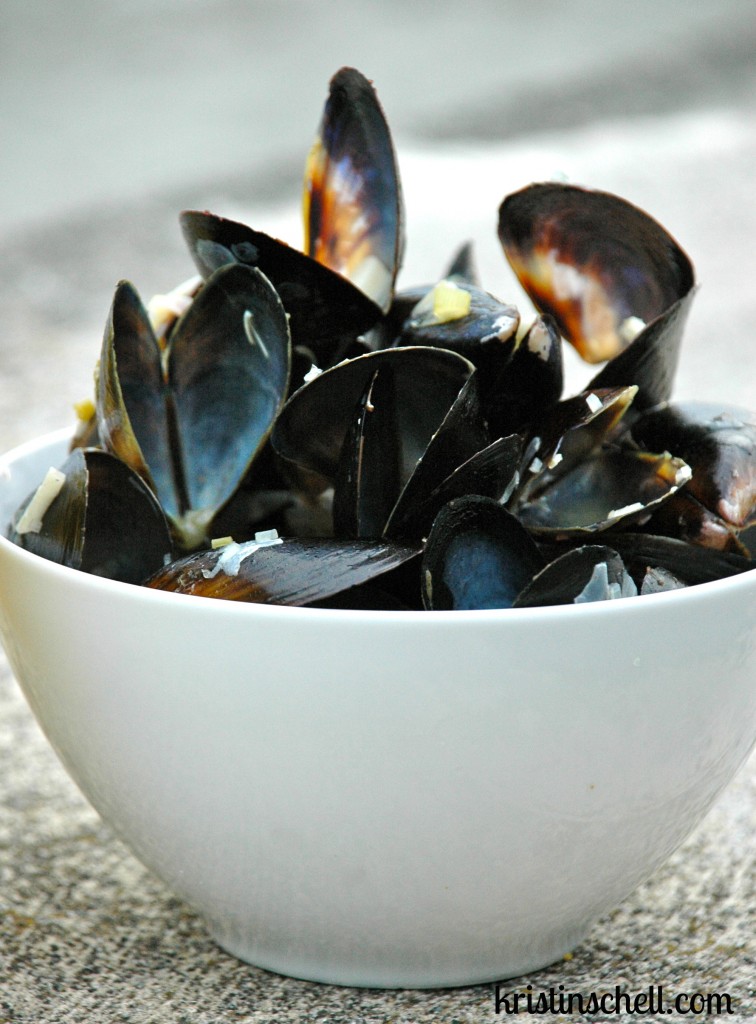 Guess what’s in the bowl?

More importantly, guess what was in the bowl?

Before Husband and I devoured them, a steamy pile of Penn Cove mussels graced our sea side supper tonight. What you see up there, my friends, is just a bowl of shells.

Back on land, and nearing supper time we were hankering for more surf. We stopped by Penn Cove and picked up 2 lbs of fresh mussels. Located in Coupeville, WA, Penn Cove is a gorgeous body of water made famous for its abundance of outstanding mussels. They did not disappoint!

Mussels require little effort for tasty results. There are infinite ways to dress up the shellfish, but I like them in a simple wine and garlic sauce. Most likely because the first bowl of mussels I ever tasted was presented in a delicious wine sauce with ample bread for mopping. I was fifteen years old and traveling to France for the first time. I had no idea what mussels, or moules, were at the time, but I’ve been a fan since that very first bite.

I’ve made mussels twice since we’ve been on Whidbey Island and both times I varied up the sauce depending on the ingredients I had on hand. For example, the first night I had a full bottle of Washington white wine so I used two cups to steam the mussels. For some reason, the second time I only had a scant quarter cup of wine!??! So, I took the cooks liberty of drinking the wine and used water with a generous amount of Old Bay Seasoning to steam the mussels. Both evenings produced a delicious bowl of steamy mussels.

I’ve tweeted with my pals @WholeFoodsATX to see if they source Penn Cove mussels. My fingers are crossed and I’ll keep you posted. You must try these sweet and simple mussels. Here’s a recipe I loosely followed from a post several years ago.

2-3 cloves garlic, minced (I use about 6 cloves, but we really like garlic!)

Rinse the mussels in cold water. De-beard if necessary. Discard mussels that are opened. Sometimes fresh mussels will slightly open, if you have one of these gently tap and the mussel should close. If not, toss.

Heat the olive oil in a big pot with a fitted lid. Add the garlic and shallots and saute until soft. Add Old Bay Seasoning, if using, and wine (or water). Stir to combine and bring to a boil.

Add mussels to boiling liquid, cover and steam for about 6 minutes. Mussels will open when fully cooked.

Remove pot from heat, stir in butter, herbs and seasonings. Pour into a big bowl and serve with wine and crusty bread!