It’s the greatest rivalry in college football. Over 100 years of tradition formed by deep seated alliances separated by the raging Red River. A river whose strength pales in comparison to it’s fierce competitors to the north and south. Since 1900 the Texas Longhorns and the Oklahoma Sooners have faced off in the legendary Red River Rivalry.

Most folks make the annual pilgrimage to the Cotton Bowl in Dallas for the promise of passionate football. Me? I’m way too deep for that.  I go for really substantial reasons, like to eat Fletcher’s corny dogs. This may or may not have been my breakfast on Saturday morning. 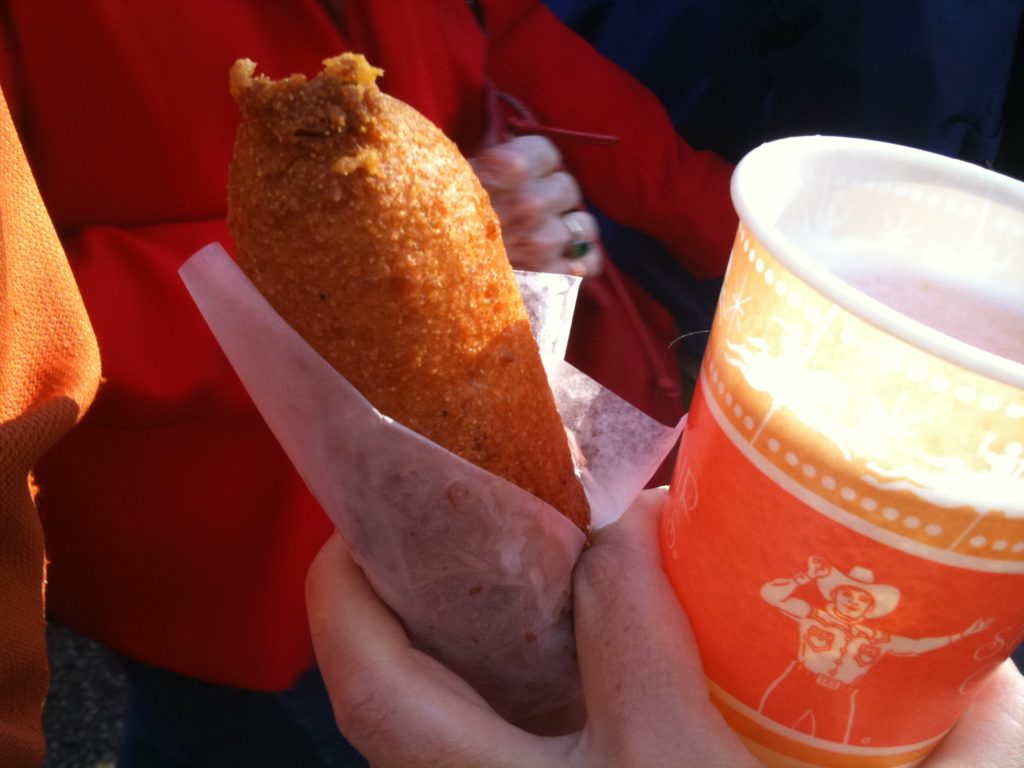 I’m aware I have some atoning to do, which is what kept me from indulging in two corny dogs.  As for the Bud Lite, well that was Husband’s.  Most of it.  Speaking of Husband, TX-OU weekend marks the anniversary of our first date thirteen years ago. He fell in love immediately. I eventually came around. And, well the rest is history. Ours anyway.

By football standards the 104th annual match Saturday wasn’t much of a game. Narrowly the Horns pulled off a win, but it wasn’t their rock solid defense on the field that kept my attention Saturday.  I was distracted by the off field presence of Colt McCoy and Sam Bradford.

Before joining Husband in our seats, I stopped in the Ladies Room. The line was long and I noticed a woman in front of me reading a booklet called I Am Second. I Am Second is a movement of people from all walks of life who share their testimonies of how life has changed for them since putting Jesus Christ first. The front of the mini book had a photo of McCoy and Bradford that completely caught my attention.  It was clear (from reading over this poor woman’s shoulder) that the famous quarter backs from both UT and Oklahoma were sharing their faith.  Together.

Improbable! Two of the top two athletes in the country, from rival teams were meeting on the field for their last Texas vs. Oklahoma shoot out.  The stakes couldn’t have been higher or the tension and expectations greater for these two young players.   And yet, floating around the record crowd of 96,000 were tiny books in which they share their powerful testimonies.

I never got my hands on one of these booklets, but watched the entire game with a whole new perspective. I knew enough of Colt and Sam’s friendship and their declarations of faith to know that God had a plan far greater than the outcome of Saturday’s score.

By birth right and college choice I’m wired to loathe OU.  But, Oklahoma’s QB has been on my heart in ways I can’t explain. Sam Bradford’s re-injury of his shoulder on Saturday is upsetting for so many reasons. In post-game interviews Sam’s frustration and disappointment were clear, yet so was his conviction that God truly has a plan in store for him.  Sam isn’t on the sidelines in God’s game.  By being second and putting Christ first, Sam wins.

Isn’t it just like God to show up at the most contended football game in the country and use the two most valuable players to further His Kingdom? I don’t know about you, but I want to be on the same team as Colt & Sam.  My name is Kristin and I am second.