I need to be honest with you. I’m a reluctant mountain mama. Don’t get me wrong I love being in the mountains. It’s doing the mountains that doesn’t come so easily for this city mouse.

Last week I arrived to Rocky Mountain National Park wearing flip flops, a crisp white linen shirt and triple layers of turquoise beads. This attire is nothing special or fancy – it’s just my normal. But my normal flops around awkward like a fish out of water up here in the wilderness.

A week into our mountain adventure I’m blending in a little better- wearing hiking boots Husband bought me on Amazon with adorable Smart Wool socks I picked up at REI in a proactive attempt to be more mountain-ish.

I had an epiphany about my city mouse vs. mountain mouse clash in a most precarious moment. Standing chest high in the freezing cold water of Sprague Lake attempting to fly fish for the first time, I realized how tightly I hold on to normal. Right there, in the middle of the lake, frustrated because I couldn’t master the rhythm of casting with my fly rod, God reminded me of some guys who also learned a lesson about holding on to normal while receiving a fishing lesson.

Jesus said, “throw your net on the right side of the boat and you will find some.” John 21:6

After the resurrection, Jesus appeared to seven of his disciples who were tired after an unsuccessful night of fishing. Unlike me, these men were actually fishermen. They knew the waters of the Sea of Tiberias well and they weren’t fishing for sport, but for provision. Yet despite their knowledge, past experiences, and ability as fishermen, after a long night their nets were empty. The disciples didn’t recognize Jesus at first when they heard a man calling out from the shore inquiring whether or not they had caught any fish. While I don’t know what the disciples thought when the apparent stranger on the shore instructed them to cast their net off the other side of the boat, I imagine at least one of them thought, “who does this guy think he is telling us how to fish? We’ve done this all our lives, it was just a bad night.”

But Scripture doesn’t tell us these men questioned the advice or made excuses. Rather, the disciples obeyed. When they cast their net on the right side of the boat they were unable to haul in the load because it was so full of fish. At that miraculous moment, John says to Peter, “it is the Lord.”

I’m not a fisherman and standing in borrowed waders struggling to learn something new felt uncomfortable. Even risky. Not because I was afraid I would fail at fly fishing, but because I realized there are areas in my life where God is asking me to trust Him and throw my net off the other side of the boat. For a long time, I have laid down and lifted up areas in my life where I’ve hit the wall doing the same old thing the same old way – ministry, blogging, weight and exercise, holding tight to schedules & routines, and controlling relationships. Oh how I long for the obedience of the disciples who tossed their nets in a new direction. To quit relying on my own knowledge, past experiences and ability and trust Him to meet my needs and provide all that I need. To hear His voice calling from the shore instructing me how. 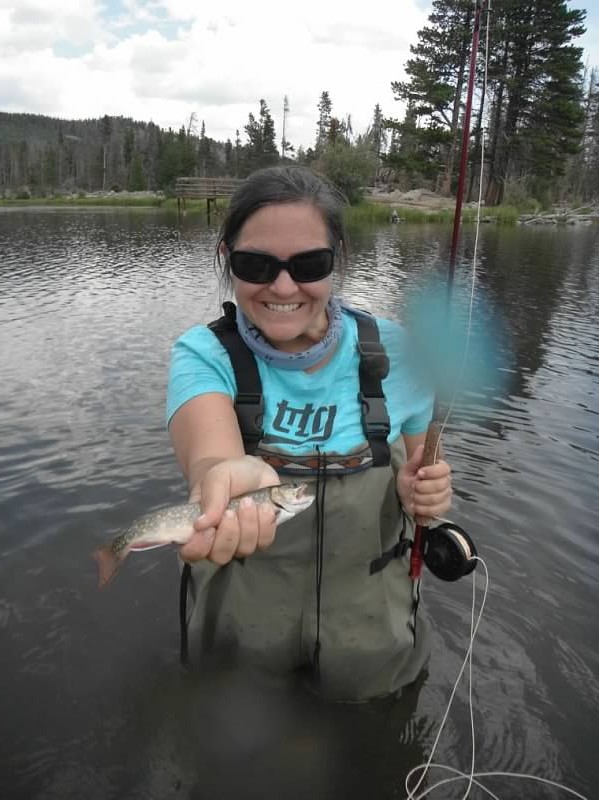 I caught a fish that day. The patient guides from Sasquatch Fly Fishing cheered me on taking pictures and telling me I was full of beginners luck. Maybe so. But I believe my catch was encouragement from the Lord to leave normal behind and try fishing from the other side of the boat.

Has the Lord ever called you to cast a familiar net in a new direction? I’d love to hear your story so we can encourage one another.

« YMCA of the Rockies: A History
Friendly Good-byes »