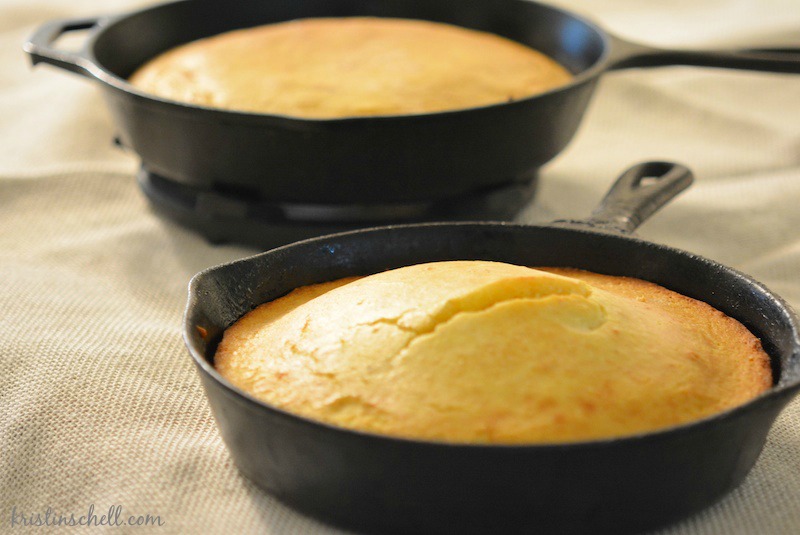 Ever since I was little, my favorite Thanksgiving side has been cornbread dressing.  I have fond memories of my grandfather, Poppy, cooking up the annual feast in their tiny, yellow kitchen.  Poppy loved to cook at the holidays and is the source of many of my cherished family recipes.  Growing up I loved Poppy’s dressing, but I never gave it much thought until we had to figure out how to make it without him.

Our biggest challenge was huge – we had no recipe.  Over the years, Mia tried to recreate the cornbread dressing, but each year we decided there was ‘just a little something missing’.  Then a few years ago my uncle jotted down some instructions for us.  As you can see, these notes hardly constitute a recipe.   But once we decoded the handwriting and regained our composure from laughing at all his editorial comments, we realized we had the information needed to attempt THE dressing.  Years of watching his father prepare Thanksgiving dinners paid off and my uncle was the missing link to our beloved dressing.

Flash forward a decade or so to my first Thanksgiving with Husband’s family.  You can’t begin to imagine my elation when I realized my mother-in-law’s dressing tasted exactly like my beloved cornbread dressing.  The exact.same.dressing. I wept with joy.  I was already in love with then-to-be-Husband, but his mother’s cornbread dressing sealed the deal. It was fate.

It took me a while to work up the courage to ask my mother-in-law for her version of the recipe. I guess I was waiting to make sure things were going to work out between Husband and me. Soon after our fourth baby was born, I figured it was as good as time as any to ask for her recipe.  And you know what? She didn’t have one.  I remember the phone conversation as clear as if it was yesterday.  She told me she had watched her mother make the dressing so many times she just had it committed to memory.  A week later, her hand written instructions arrived in our mailbox.  And just as I suspected her dressing and my grandfather’s dressing were almost identical.

I’m not sure where this dressing originated but it must have been widely known in Texas during the early part of the 20th century.  My guess is that Pepperidge Farm published it and both my grandfather and mother-in-law’s mother had access to the recipe.  Here is our family’s version of Texas Cornbread Dressing passed down through generations of both my family and Husband’s.

Crumble cornbread and and stuffing mix in a large mixing bowl.  Set aside.

Saute the onions and celery in butter until soft.  Pour in bowl over bread mixture.  Add turkey drippings, if using, and chicken broth.  You will need to eyeball exactly how much broth to use.  The mixture should be very moist, but not runny.  Add raw, beaten eggs and continue to stir until combined.  Add sage, salt and pepper. Gently fold in chopped hard boiled eggs.

Put mixture in a large, greased baking dish.  At this point the dressing can be covered and refrigerated over night.  Bake at 350 for 1 hour or until dressing feels firm and begins to brown.

From my uncle: Add paprika and chopped parsley on top of dressing for decoration.