Last month, I announced the Recipe Contest.  I was eager to hear from you, my dear readers, and equally excited to know what your favorite recipes were.  Thank you for sharing.  Over the last few weeks, I have made lamb, pork, scallops, steaks, zucchini, linguini, soups, lasagnas, enchiladas, salsas, potatoes, stews, goulash, chili, and casseroles.  Husband thanks you.  The Littles thank you.  Whole Foods and HEB really thank you.

Judging was difficult.  The recipes were as varied as the day is long and every one of them a keeper.  But, one stood out enough to win our hearts forever.  Bacon Wrapped Pork Tenderloin from Lida Payne.

In all honesty, the pork tenderloin recipe started out as the clear underdog.  Husband does not like pork.  I even called Husband the afternoon I was making the recipe to warn him I was testing a pork recipe.  Luckily, he still came home that night.

Congratulations Lida!  You are the winner of the $50 gift certificate to Williams-Sonoma.  Send me an email and I will get the card to you so you can enjoy for the holidays!

Thanks again to everyone who played along!  I’ll have another contest soon.  In the meantime, do yourselves a favor and make Lida’s Bacon Wrapped Pork Tenderloin.  I know you’ll love it.  I’m giving you the recipe as submitted from Lida.  The photos are mine from the the taste test.  Enjoy.

From Real Simple Magazine, May 2006

1 white or yellow onion, cut into about 8 wedges

Heat oven to 400 degrees.  Pat pork dry with paper towels.  Season with 1/2 t. of the salt, 1/2 t. of the pepper, and the thyme. Wrap it with the bacon – (no need to secure the bacon with toothpicks or anything).  Heat the oil in large cast iron skillet over medium/high heat.

Add the pork and vegetables- season with the remaining salt and pepper. (It may seem kind of crowded, but everything will shrink and cook down a little.)  Cook the pork for 2 min. on each side.  Stir the veggies around a little.  Transfer the skillet to the oven and roast for 25 minutes.  (I turn it over half way through and give the veggies a stir).  Let rest for 5-10 minutes and serve with the vegetables. 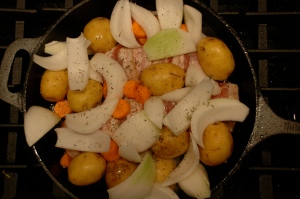 *I was drawn to this recipe because I don’t have a fancy stove to oven skillet, but a lot of recipes call for one.  This certain month’s issue of Real Simple had a section for ‘cast iron cooking’, and I have one of those!

*The original recipe calls for fennel and dried apricots – I substituted onions, carrots, and potatoes.

*I put the skillet right in the middle of the table and serve from there (obviously on top of some kitchen towels first).  The juices on the bottom of the pan are so yummy, make sure you rub your meat and veggies all around in them!

*This is so easy but seems special.